To the product section 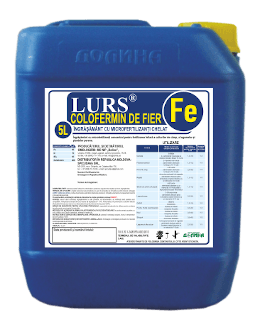 *Colofermine is a multicomponent complexing agent (analogue of chelating agents), which consists of various organic compounds, optimally balanced for maximum absorption and plant uptake (up to 100%) of the corresponding nutrients (main active ingredient) in micronutrient fertilizers.

Depending on the type of micronutrient fertilizers, among other components, colofermin may contain colamine, various complexes of amino acids, micronutrients, including nitrogen, sulfur, sodium in sufficiently high concentrations (up to 280 g/L). Therefore, colofermin also serves as an additional source of plant nutrition.

Due to the above-mentioned factors, our formulations are more effective than the ones, produced by our competitors, even if they have a little higher concentration of an active ingredient.

LURS® colofermin iron eliminates effectively ferrum deficiency in plants. It does not contain any ballast additives, so it does not cause leaf burn. It is completely absorbed through the leaf surface of plants.

Ferrum is directly involved in the formation of chlorophyll, it is a part of a series of enzymes, influences the respiration rate of plants.

Particularly sensitive to iron deficiency are potatoes, cabbage, tomatoes, corn, legumes, fruit crops and grapes. Iron deficiency is most often observed on calcareous soils. Phosphate fertilizers also affect the solubility of iron: addition of high doses of it promotes the formation of low-soluble iron phosphate in the soil.

When there is an iron deficiency, chlorosis develops. In leaves chlorophyll formation is suppressed, leaves lose their green color, darken and fall prematurely. Plant growth slows down.

At the first signs of chlorosis or as a preventive measure, when there is a low content of iron in the soil, it is necessary to carry out foliar treatments.

Application of LURS® colofermin iron no later than 5 days after the onset of the disease restores the color of the leaves.

The formulation contains a high concentration of ions of iron, which provides a reduction in dose of its application, and subsequently the costs per hectare.

Sulfur prevents the destruction of chloroplasts, which makes photosynthesis the most efficient. Nitrogen in LURS® colofermin iron is in ammonium and amide form, which enhances root development.

The formulation can be also used in hard water. Active substance of the formulation prevents from calcium sulphate (gypsum) formation.

Compatibility: LURS® colofermin iron performs well in tank mixes with herbicides, insecticides, fungicides and biological preparations. Prior to starting preparation of a tank mix, always check the formulations for compatibility.

To avoid leaf and fruit burn, do not apply the formulations in high air temperatures. To obtain the maximum effect, it is advisable to conduct treatments in the evening.

Treatment during the flowering period is not recommended.

LURS® colofermin iron fier has a significant physiological effect on plants, namely:
It is recommended for use in conjunction with VIMPEL ®plant growth stimulator.
Recommended technologies

1. INFORMATION FOR CONSUMERS: follow the instructions when using the formulation. The efficacy of the formulation and its ease of use depend on the application, storage and transportation conditions specified by the manufacturer.

2. COMPATIBILITY WITH OTHER FORMULATIONS: the micronutrient fertilizer is applied during the growing season either prophylactically or according to the diagnostics results based on the application regulations. It performs well in tank mixes with plant protection products (unless otherwise specified by the manufacturer of the plant protection products), urea (in the recommended concentrations when using foliar fertilization of agricultural crops according to the crop growth stages), UAN, plant growth regulators, microfertilizers and biological preparations.

Warning! Prior to starting preparation of a tank mix, always check the formulations for compatibility!

For this purpose take a container, pour in it some water (which is to be used for the main application), add the tank mix components in proportions, based on the field rates of consumption. After closing the container, mix the contents by shaking it 10-15 times. Evaluate the tank mixture visually twice: immediately after mixing and after the mixture has settled (in about 30 minutes). Incompatibility of formulations is indicated by their separation into layers, residuum occurrence, flocculation of the mixture, formation of sludge that does not disperse.

Attention! It is possible to use the formulation in hard water. The active substances contained in it do not form compounds with hardness salts (СаSO4٠2H2О), hence the solution does not grow turbid.

If there are no compatibility problems, prepare the working solution just before spraying (direct application). Shake the product thoroughly in the original package and pour it directly into the sprayer tank, which is to be previously filled with water to 2/3 of its volume. After this with the mixing mode turned on add the components of the tank mixture in sequence stated in the recommendations and finish the process with filling the tank with water. Stirring of the mixture should be continued throughout the period of its preparation, as well as during application.

4. MIXING ORDER OF SPRAYING SOLUTION COMPONENTS: when preparing the tank mixture, stick to the following sequence of components.

Tank mix
Tank mix with UAN
Tank mix with urea
Attention! In preparing a tank mix, care should be taken to ensure that the mixing of the components (such as growth regulators, PPPs, microfertilizers, etc.) is conducted solely in water!

5. APPLICATION REQUIREMENTS: spraying should be done either early in the morning or in the evening, when the humidity level is high to avoid chemical leaf burn. The optimum air temperature is +10…+25 °С (50 — 77 ºF), wind speed up to 5 — 7 m/s depending on the sprayer type. It is not recommended carrying out spraying operations during foggy weather or in the presence of dew, which can lead to surface overflow of the solution and hence the reduction of the treatment efficiency. The spraying should be stopped 1.5 — 2 hours before the rain.

Attention! Use а freshly mixed solution. Do not store the prepared solution more than 24 hours.

6. STORAGE AND TRANSPORTATION: The formulation should be stored in a warehouse or storage building, designed specifically for this purpose. Storage area should be free of direct sunlight, moisture, pollution and mechanical damage to the container. Store at temperature above 0 ºС below +30 ºС (50 — 86 ºF), in the original closed package in an upright position, with the cap facing up in a cardboard box. Do not stack cardboard boxes more than 3 high.

Decrease of temperature below -15 ºС (5 ºF) results in the product decrease of viscosity, the prolonged storage may cause sediment formation.

Any form of transport is possible while in covered vehicles. The use of open vehicles, which provide protection against precipitation, is allowed as well.

7. WHO CLASSIFICATION, TOXICITY: 4th toxicity class. The formulation is nontoxic, does not cause allergies, is environmentally friendly and absolutely harmless to pollinating insects.

8. PRECAUTIONS: keep away from children and animals. When carrying out spraying operations, use the appropriate and adjusted equipment, follow generally accepted safety standards.

9. FIRST AID INSTRUCTIONS: if the skin or eyes are contaminated with the preparation, flush them with water. If necessary, call a doctor.

10. CONTAINER AND LEFTOVER FORMULATION DISPOSAL: a container and leftover formulation do not require specific methods of disposal and neutralization.